I've been thinking a lot today about "continuing tragedy"- how the mistreatment and sensationalization of tragedy is a tragedy in itself. The countless YouTube video essays about the Junko Furuta case, for example, and how stories of very real people who experienced very real suffering are reduced and repackaged into something akin to an urban legend or boogeyman. YouTube is flooded with this glut of videos that treat the graphic deaths of countless people like campfire ghost stories with absurdly photoshopped thumbnails that are so disrespectful it practically borderlines on parody.

Why do we do this? Why do people do this? It's so dehumanizing. Is that not obvious? I was up a lot last night tossing and turning thinking about Yukiko Okada, the showa idol that died by suicide, in this context. Her death has completely overwritten her accomplishments. The suggested searches on Google related to her are morbid and her music and recorded life have been sidelined by her fate. I really don't know what else to say about it beyond the fact that it's just tragic all around. The world has failed these people and continues to fail them. I'm sorry, Junko and Yukiko.

What are we doing? Like on here. In general.

I was wondering I guess, what's the true goal of nostalgic web design? I guess it varies based on the person obviously. I love old internet stuff but sometimes I get kinda depressed and I start seeing it as "chasing the dragon", like trying to revive or relive fuzzy, distant time periods. Not that it's necessarily living in the past but it feels that way sometimes, in a way that's just kinda sad. In a way that feels reflective. Like staring into a mirror while the clock ticks.

I guess it's this feeling of everything being a replica. A copy, or an attempted recreation. Sometimes these sites feel like museums, but in a way that just feels kinda hollow. Like a reminder of time, of loss, of culture's constant shifting and changing. Of mortality, of age. etc. It's inevitable, I guess. But it's depressing.

A lot of my interests and hobbies are parties I was late to. Sometimes there's other people in the room with me, in the empty remains of a party long gone, and I pick up the pieces and study them, trying to understand lost aspects of what once was. The 20-somethings that played DDR in 2000 are 40-somethings now. Their slang, their customs, etc. just burn away with time- so things like that, finding bits and pieces of something old like that, really interests me. In the spirit of keeping it alive.

But it'll always be a replica. If I play DDR now and I choose a difficult track and set it to Expert but I verbally call it "heavy" and say "I'm playing this track on heavy" it's just a replica. I wasn't there when people did that, I wasn't there when they said that. I wasn't part of that culture. I'm just imitating it, recreating it to try and feel included. Like I'm part of a party that ended a long time ago. So sometimes it makes me feel like a poser.

There's a double-edged nature to age also- I can sit around and envy twenty-year-old kids who are young enough to still have the energy I used to have but why would I? I was alive and present and cognizant to witness and experience things they can only imagine, know what I mean? So I guess there's that benefit. The parties I actually was present for, even if it feels strange and discordant to see younger people with an interest in older things I was around for, in a way that feels sorta distorted. Like an aesthetic appropriation of what something was. It makes me wonder if I'm doing the same with anything retro that I like- and seeing people shift and morph and recontextualize the past that I witnessed is disorienting. It blurs the lines in my head, it makes it hard to remember- was this the way things were? Was it always like this? Was it really like this? What was it like again? How did it feel again? Make me feel it again. I don't want replicas. I don't want the shattered remains of a lost world, repurposed and rebuilt into a facsimile- a biased approximation. I want the real thing. I want the air I used to breathe. I want the warmth of the sun on my skin, the way it felt 15 years ago- not the way it feels now. It feels so different now. I feel so different now. There's too much in my head. I've been overexposed, I've born witness to too many things. Memories of a thousand yesterdays stack endlessly on top of fragmented bits of a world I'll never see again, a world that can't be defined by just blinkies and MySpace gifs. A world that just doesn't exist anymore.

If you're reading this, live with me. And when I'm dead and gone and you're still here, remember me and the things I've said, the things I've done, and the thoughts I had. Just please don't forget. I don't want to be forgotten like everything else, and I don't want to be remembered in a distorted way- I don't want a replica to reside in the minds of those that knew me. I want my true self to be remembered, at least until I'm not, and I fade away just like the millions of others who've walked this same earth.

I finished Evangelion today. I really enjoyed it. I've got a lot swirling around in my head right now but I kinda wanna mention a couple things that I keep thinking about. I might migrate these thoughts over to a dedicated page eventually, it depends on how deep I wanna go into this stuff. A lot of the story itself is kinda secondary focus for me, what I care about the most is the psychology of the characters and how it's portrayed. The stuff with the angels and Seele are neat and all but they make my brain go into "bloodborne mode" where I end up violently trying to connect dots in pursuit of a greater understanding and to be honest I'm too exhausted right now to even consider it.

One of the things I wanted to talk about especially is the "alternate reality" scene in episode 26. I've seen people online treat this scene as comedic or funny, etc. and in some ways it is but in a lot of ways it's also haunting and deeply unnerving- I think because, after 25 episodes of complex psychological drama, seeing the same characters presented in a very cliche and generic comedy anime setting is kind of genuinely horrifying. It's really, really freaky to me- Evangelion is a two-dimensional series with three-dimensional characters, if that makes sense. The alternate reality is so harrowing because it shows you a glimpse into a world where everything, characters and all, are completely two-dimensional and devoid of greater meaning or greater humanity. Everything reduced down into disingenuine tropes. 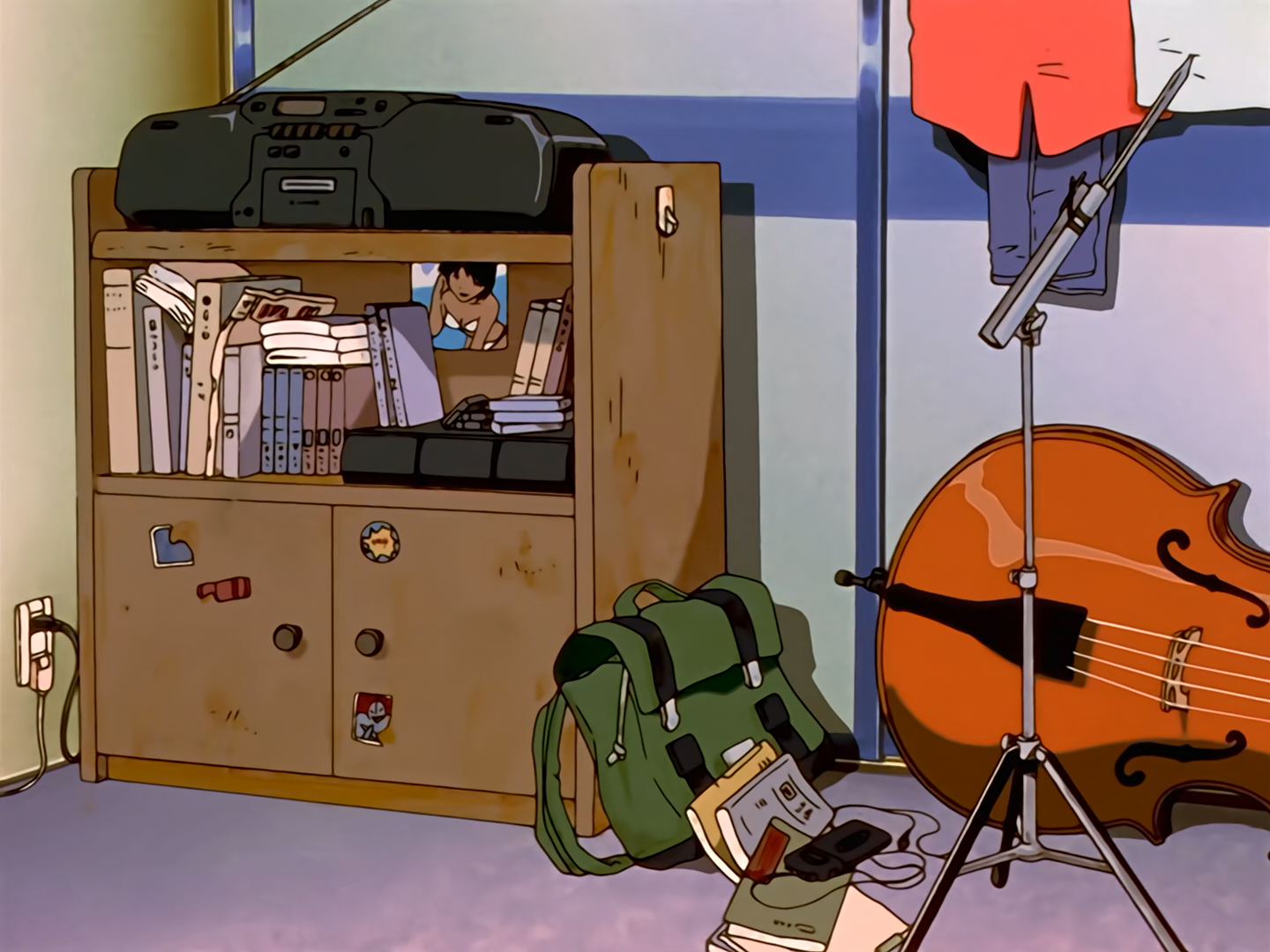 Shinji's alt-reality bedroom. At least he still has his cello. 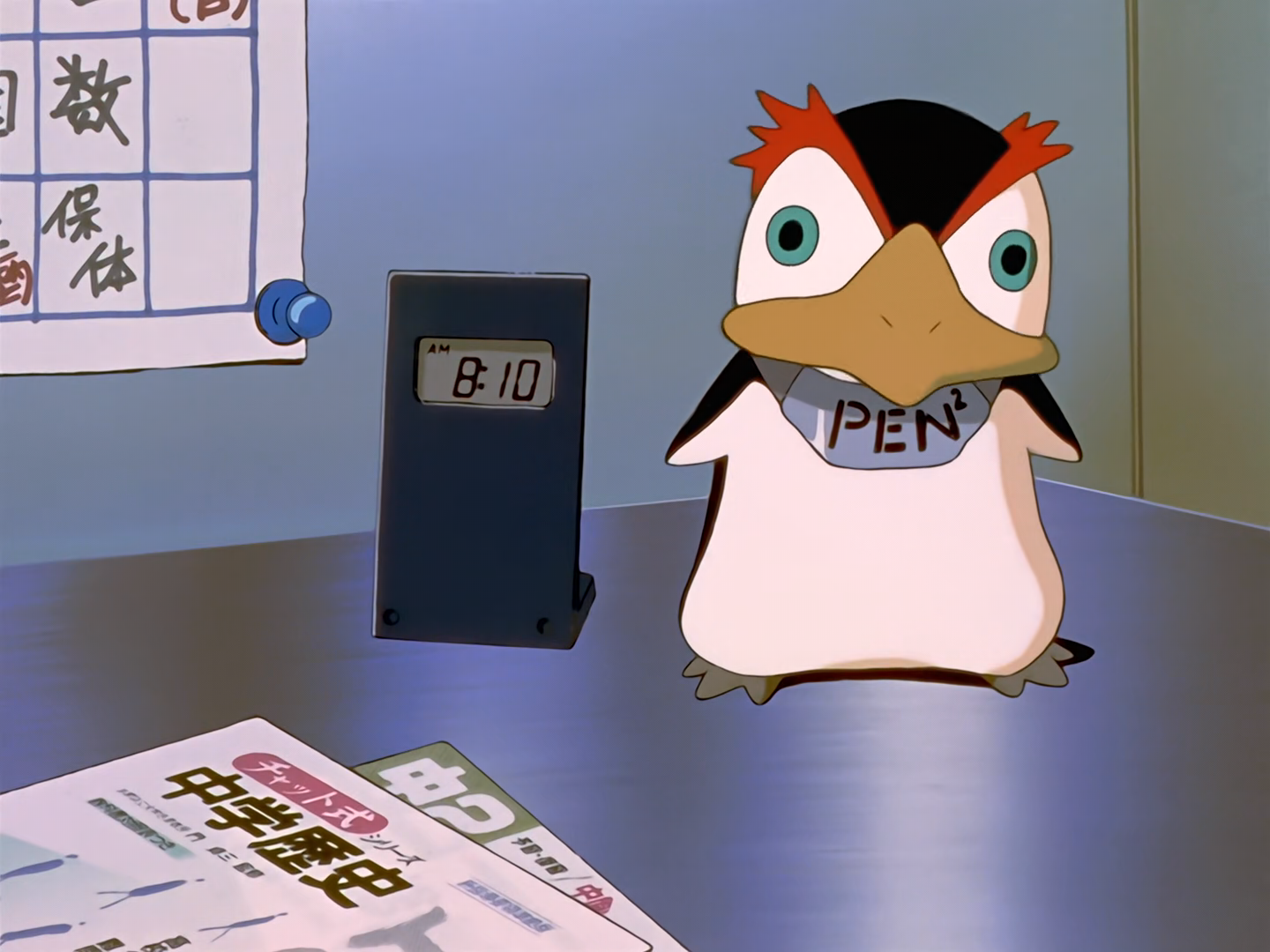 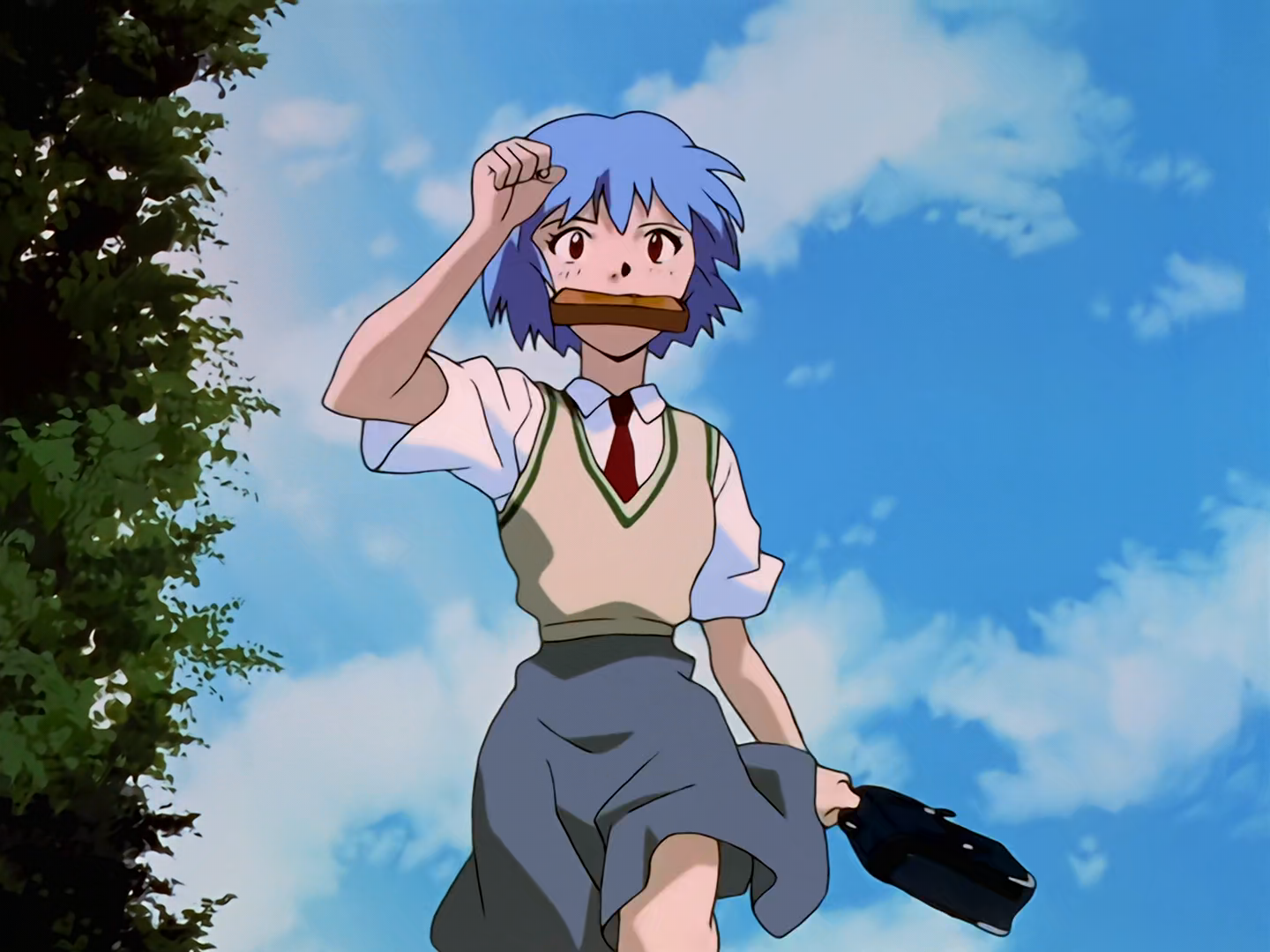 Rei, one of the most interesting and tragic characters in the series, watered down and diluted into a generic schoolgirl archetype. ADV gives her kind of a dumb and goofy voice in this sequence, which is equal parts amusing and depressing. 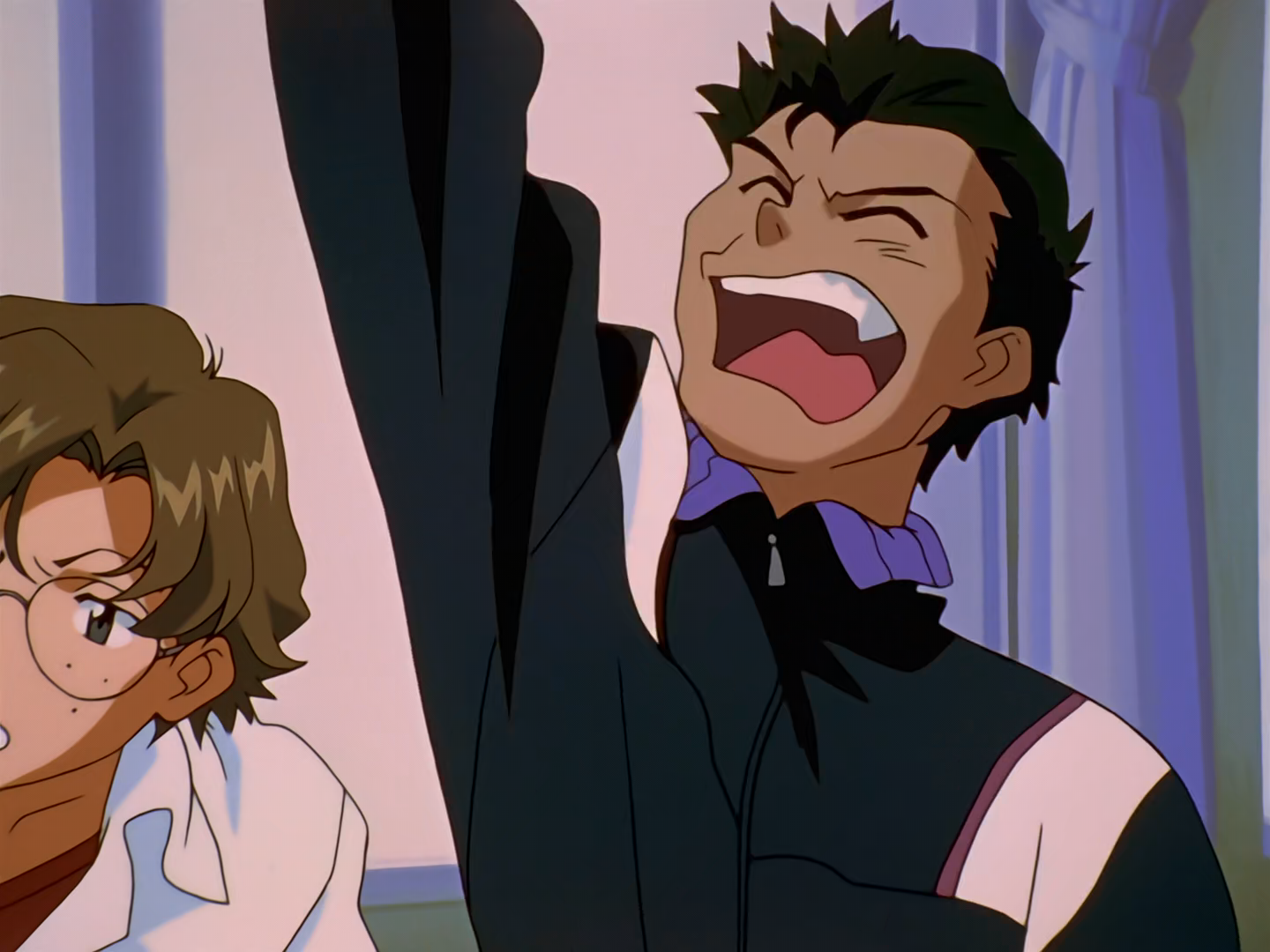 The golden-hearted and compassionate Toji, reduced into a blabbering meathead idiot.

It's all really sad. Even sadder I guess is that, for years of my life, these scenes were one of the only things I had been exposed to from Eva. You know what I wanna say real fast? The internet does a fucking terrible job of portraying Evangelion. Seriously. I've never seen a series more flanderized in my fucking life by randos online. These cutesy generic tropefest sequences have been gifed to hell and back and plastered all over Tumblr, 4chan has been shitted up with Asuka/Rei threads literally since the dawn of its creation, everyone and their grandma has seen the "CONGRATULATIONS!" bit already in much the same way that anyone born after 1980 knows that Vader is Luke's dad without having ever seen Empire, etc. It's all such a mess and it explains literally nothing. It portrays literally nothing positive or interesting about the series, it puts fuckall focus on the psychological aspects, it completely ignores any of the tragic elements just for sake of "LOOK HOW AESTHETIC THIS GIF OF MISATO CRYING IS ON MY BLOG!!!!!!!!!" It's such a joke, man.

I don't even know what's going on in my brain right now. I'm gonna dump a lot of thoughts here.

I've been watching Evangelion for the first time and it's effectively both ripped me completely from whatever cognitive void I've been in for god knows how long while also making my brain feel paralyzed to the point of inactivity. I'm having a really hard time trying to describe it without using platitudes but it feels like the kind of scenario where I'll never be the same after I finish this series. I'm not sure I've ever thought this deeply or so complex about psychology, about trauma, about people and human relationships before. It's never been presented to me in such a direct way because I've spent my entire life basically running from these thoughts that Eva has effectively beamed into my retinas, like it's picked me up and shaken me by the shoulders and forced these thoughts out of me that I've never thought before. I see myself in these characters, I see my friends in these characters, I see my family in these characters. I see past sexual partners in these characters- aspects of Misato and Asuka, especially- pained, damaged women. The way the series portrays sex in general has completely erroded away what years of shlock ecchi anime have done to my perception of how sex in anime is presented. It's just insane. All of it is insane, but in this deep, complicated, fascinating way that feels unlike anything I've ever seen before.

Asuka's self-hatred, her attention-seeking behavior and her unjust cruelty to others... man, I dunno. It just blew my fucking brain wide open. There's a lot of aspects of Shinji I relate to, but Asuka especially is the one where I just feel really vulnerable or exposed when she's deep in her own mind. It hits close to home in ways I didn't know were possible. I see bits and pieces of myself and my own trauma in a lot of this story, laser-focused and zeroed in in such a way that I've never really felt before. A way that years of therapy never made me feel before. Like my mind has been unlocked in some way. I don't even know how to describe it. It's so hard to describe.