One of my favorite arcade bootlegger companies is Falcon. Alongside Orca (the company that would later become Crux, which would in turn be succeeded by Toaplan, which would subsequently fold and then splinter off into even more succeeding companies like Raizing, Cave, and Gazelle), Falcon is another arcade manufacturer from the early 80s who quite frankly just didn't give a fuck. Almost everything Falcon put out was bootleg- bootlegs of Pac-Man, bootlegs of Donkey Kong, bootlegs of Jump Bug, Defender, Amidar, etc. Bootlegs of, honestly, a pretty wide variety of random games with the occasional "is this an original title? I have no idea" mixed in (see: games like Jin, a Qix clone, and Dorodon, a strange and unique hack of Universal's Lady Bug) 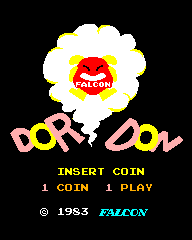 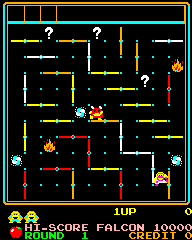 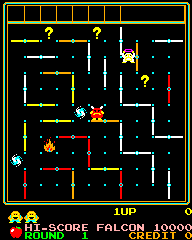 Dorodon especially is a weird one. Mame credits the game to UPL, a Universal subsidiary that would later go on to develop games like Mutant Night and Atomic Robo-Kid, but both romsets in Mame are loaded with Falcon branding. Even stranger, both romsets in Mame have some stark differences, and to be honest I can't tell which set is earlier. Set 2 (pictured above) stars a tiny chimp in overalls (altho it seems like the color prom is incorrect given the miscolored sprite), and Set 1 stars a little yellow blob. There's also various graphical differences- the title screen logo has been redrawn and the Falcon copyright is completely different. 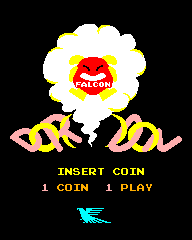 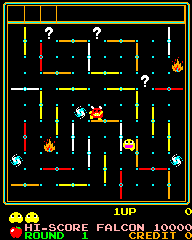 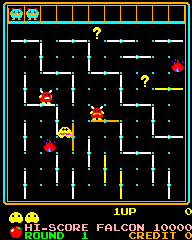 Pictured above: set 1, starring the yellow blob. Can you spot all the differences?

Here's a mockup of our monkey hero from Set 2 of Dorodon with corrected colors. I actually tried hacking the roms to fix this but it seems like Lady Bug hardware uses some really obtuse method of storing and displaying colors- modifying just the monkey's palette affected other colors in the prom that I didn't even touch. 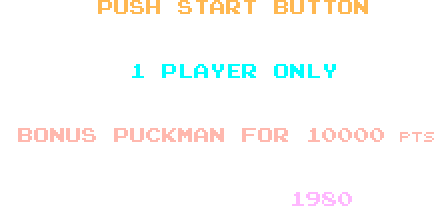 I know what you're thinking- 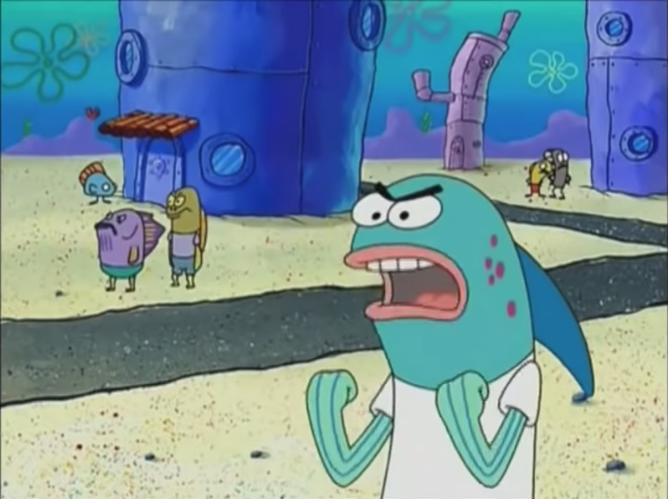 "HOW MANY FUCKING PAC-MAN PAGES DOES ONE WEBSITE NEED"

And I'll tell you what I'm thinking- I'm thinking about how fucked up the background fish look like in that Spongebob screenshot. Look at the green dude in the near distance- what's going on with his face? Why does he look like that? What about the guy in the way back near the door? He's so far away and lacking in detail that he's only sorta marginally better than a stick figure, look at his tiny floppy little feet and solid white circle for an eye.