This is a WIP page dedicated to all my favorite Twitter posts, because I am very awesome and funny and sexy and wise and the things I say and do should not be forgotten.

"haters will see you swimming and call it photoshop" - Silly Bitchell 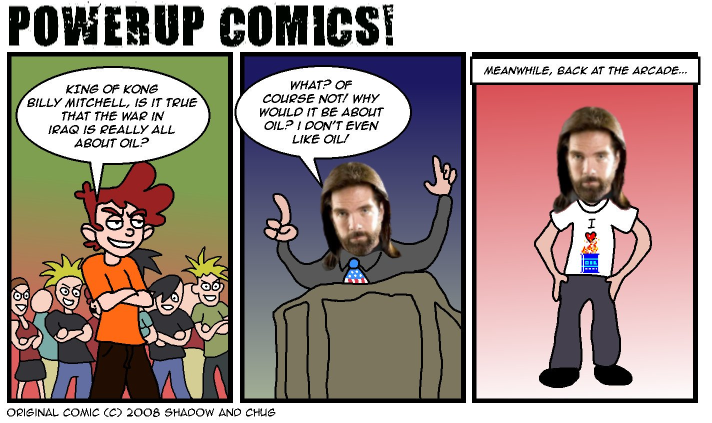 The above tweet is the crown jewel of my Twitter existence. It rests eloquently at 17 retweets and 64 likes. It's a painstaking traceover by hand of the Powerup Comics "bush loves oil" comic that you've probably seen around online, modified to star Billy Mitchell, famous video game person and hot sauce entrepeneur. I bungled the dialog by mistake and wrote "meanwhile at the arcade" instead of "later at the arcade", causing some sort of strange chronological discrepancy where the second and third panels are now happening concurrently, implying that either Billy Mitchell is capable of existing in two places at once or there are multiple Billy Mitchells.

Five Awesome Similarities Between Me and Luigi From the Mario Brothers! 1. Silly and Goofy 2. Cowardly Sometimes 3. Supportive Friend 4. Well-Endowed 5. Loves Spaghetti! Mar 18, 2018 (I have no recollection of tweeting this)