I like Pac-Man. I like bootlegs. I like Pac-Man bootlegs. On January 6th, 2021 a package arrived for me from Canada after being lost in Chicago for several weeks at a USPS facility. At this point I was early on in a relatively rough case of COVID, but thanks to my steel resolve and incredibly skewed priorities I lumbered around like a weak-kneed zombie struggling to tear open the box, determined to do what had to be done, what no mere man or mortal had done before. I was going to dump the roms for Barracuda, a Pac-Man bootleg from a Canadian company called Coinex.

Reviewed in the July 1982 issue of Electronic Games, Barracuda is, long story short, a variant of everybody's favorite Pac-Man bootleg- Hanglyman. The only unique program rom is the 6J equivalent- which contains the altered text on the title screen. Other than that, Barracuda is just Hanglyman reskinned using the graphics from Piranha, another fish-themed forgery. The gameplay is entirely identical to Hangly, so much so that the only requirements to convert an existing Hanglyman board to Barracuda is to swap the graphics roms and replace the 6J program rom. Clearly our pescatorial pirates weren't interested in putting too much effort into their art here. 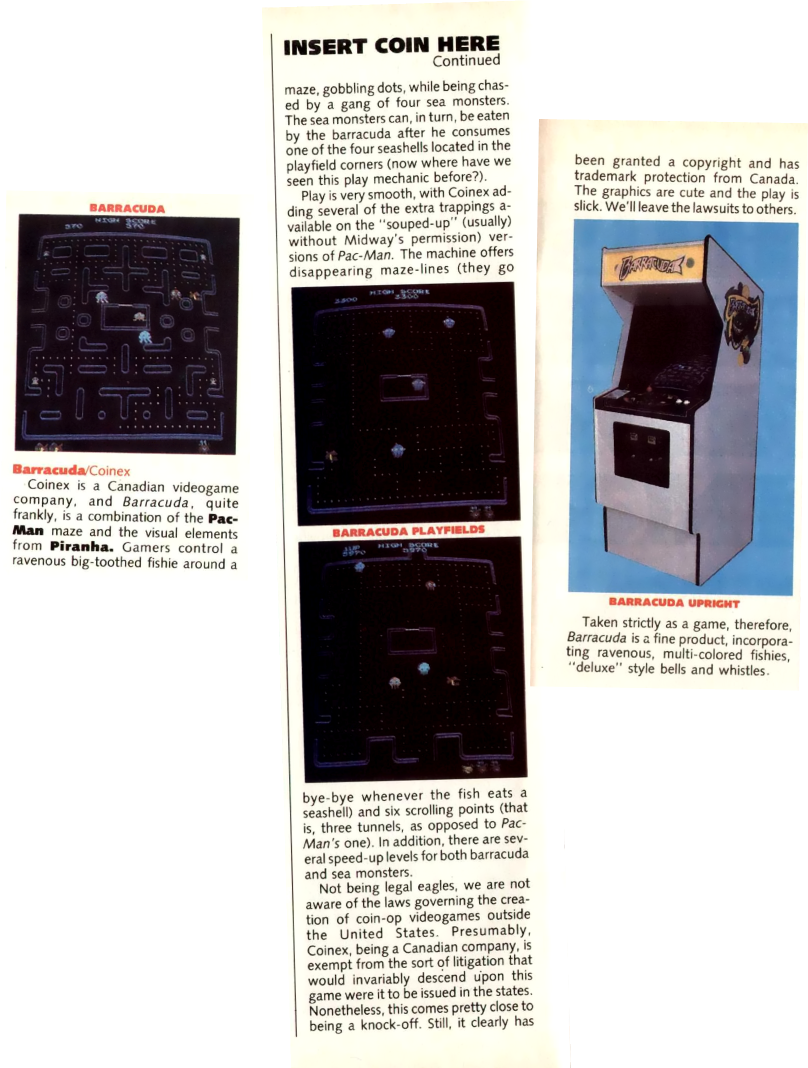 The aforementioned Barracuda review as it appeared in the July 1982 issue of Electronic Games magazine.

I'd first read about Barracuda in the Unmamed list of games that weren't yet dumped and playable in Mame. Like Mazeman, once I was aware of its existence and its status as a "lost" Pac-Man boot I kept an eye out in the event I'd eventually stumble into one, and thankfully I did exactly that on October 30th, 2020 (according to my Discord message logs, at least). A member named Lamonsoff from Uxbridge, Ontario on the KLOV forums had a board and I reached out to him hoping to take it off his hands, dump the roms, and preserve it and all of its fishy goodness. He was super helpful and ran several tests on the game for me, listing off the differences I had asked about while providing pictures (posted below). Finally, on December 12th of that year, I purchased the game and Barracuda was off to its new home. 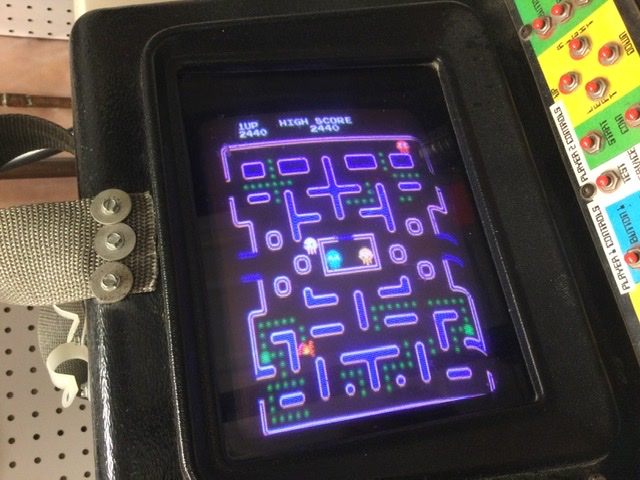 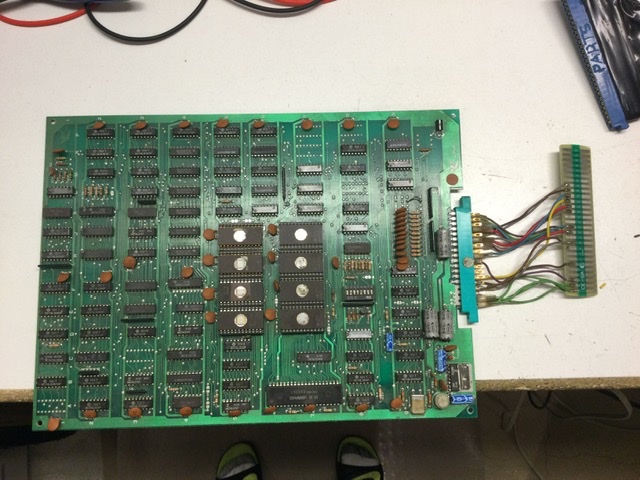 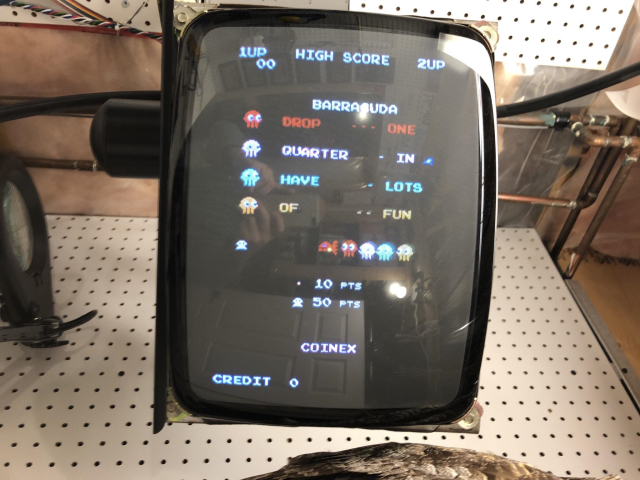 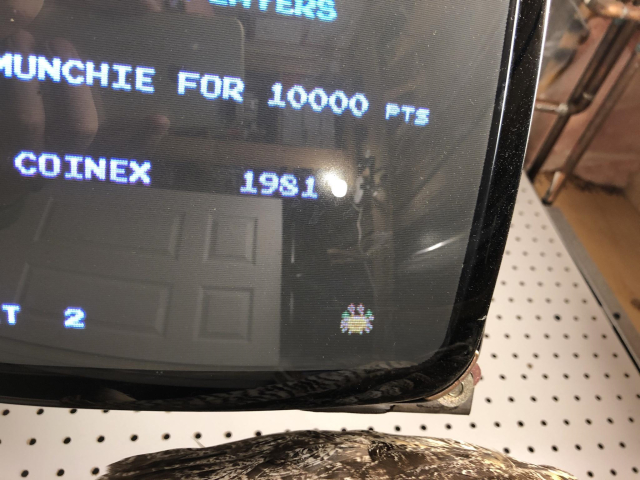 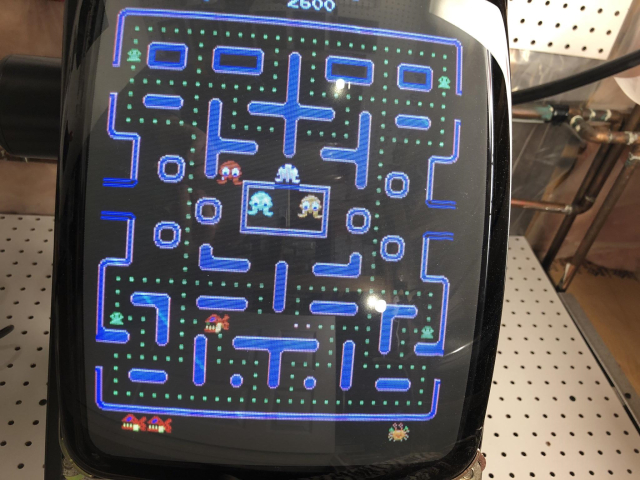 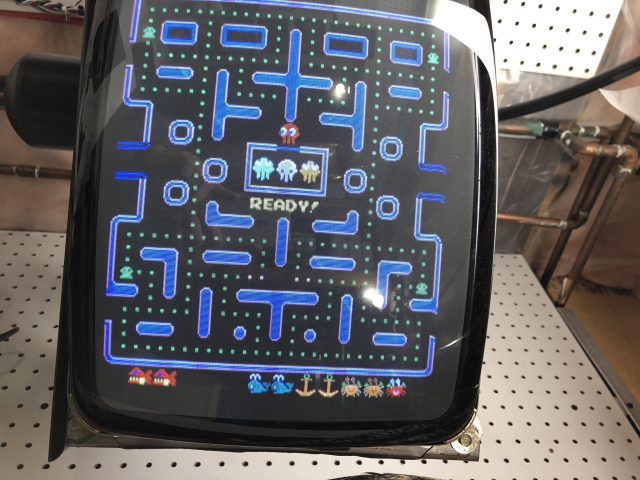 Like I mentioned earlier Barracuda was dumped in early January of this year (2021), but wasn't submitted to Mame until January 29th, the reason being my inability to explain the colors in the game. Y'see, as I've mentioned in other pages on this site, Pac-Man's colors are drawn from two chips on the board- the 4A (the color table prom) and the 7F (the palette prom). Barracuda contains unique colors when in play, which implied that the 4A prom had almost undoubtedly been modified. I got to work desoldering the soldered-down prom and dumping it using an adapter to connect it to my USB eprom programmer and I was confused out of my mind to find that the prom verified in Romident as being 100% identical to the bog standard Pac-Man prom, so how the hell were the colors different? What was responsible?? I desoldered the 7F and dumped that also just in case that was somehow modified and once again the chip verified as being no different than normal. I flipped the board around and looked all over until I came across a cut trace in the 4A circuitry- the culprit responsible for our unique aquatic palette of neon green dots in a deep blue maze. The cut trace was affecting the way the game addressed the palettes, shifting them up a number for certain visual elements (ie. instead of using palette 10 for the maze like usual, the game was loading palette 11 instead, normally used for vulnerable ghosts). However, because the Barracuda screenshots shown in Electronic Games above depict the game using the standard Pac-Man colors, I think it's fair to say this cut was an accident even if admitting that is a bitter pill to swallow, since the unique colors the cut introduced help the game stand out in a sea of otherwise boring Pac clones. 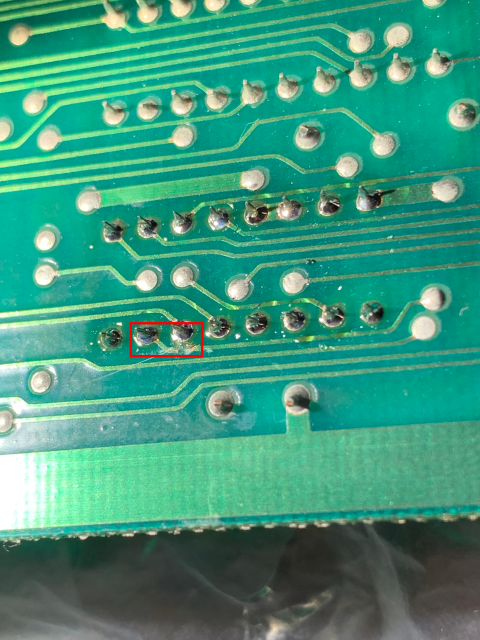 A close-up of the cut trace.

Barracuda has been submitted to Mame at this point and will be included in version 0.229. Major thanks to Tafoid and Ivan Vangelista for answering my emails and accepting my submission. You can see screenshots of Barracuda running in Mame below: 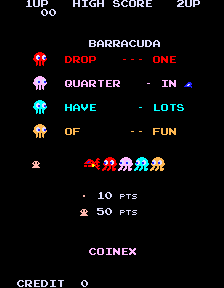 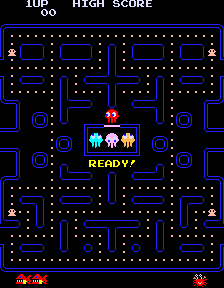 I've created a hack for Barracuda that simulates the cut 4A trace in code as well as fixing the tunnels like my other Hanglyman hack. You can find that on my Pac-Man Hacking Page as soon as its available.

EAT THEM UP YUM YUM